I am writing a blog post after eight months, may the odds be on my side.

This blog post is to spread the news of “The future of the past“, an initiative by Team Future that intends to connect the new generation of Kolkata’s artistic youth to its own past and heritage. If you are creative and love to do something out of the box with the city’s culture and heritage then click on the above link to know more.

Kolkata, the “Cultural Capital of India”, “The City of Processions”, “The City of Palaces”, and the “City of Joy”, has many small stories with which every other citizen is living their high paced life busy making their fortune.

One such story is how Kolkata was divided into three unequal parts.
1. The Black Town
(black stays on top)
2. The Grey Town
3. The White Town 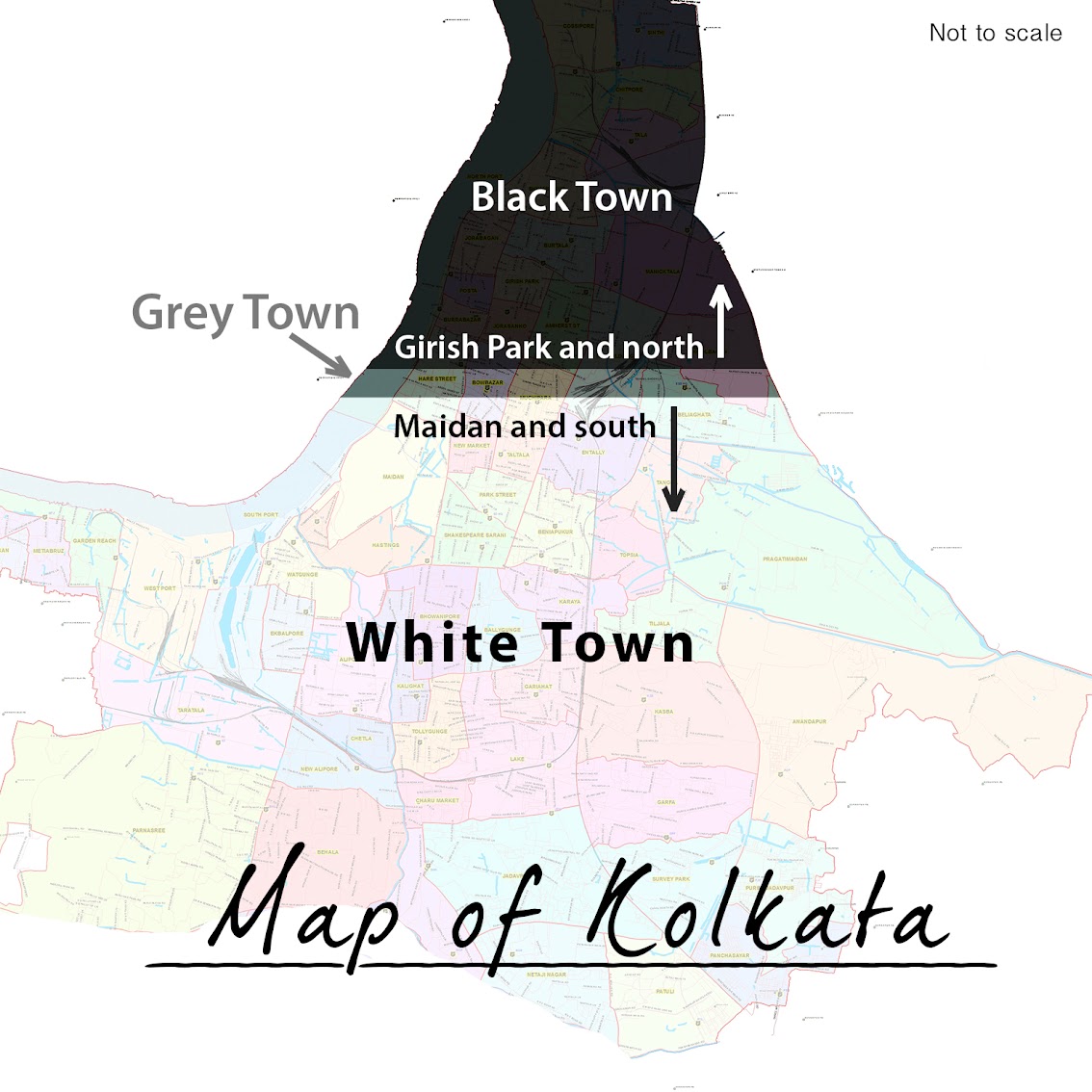 Pictoral depiction of the divided City

The stretch of Central Avenue from Bowbazaar to Burrabazzar divides Kolkata into two parts, the black town and the white town. The black town, presently known as North Kolkata was the area where the natives of the then contemporary times were pushed to, resulting in congestion, densely populated area and narrow roads. Whereas the white town, presently South Kolkata, were occupied by the “White” skinned monarch.
The stretch dividing the city into two parts became the Grey Town, which turned out to be the area for refugees to settle, the trading hub of Kolkata and the locality where many cultures converged.

Buddhism was one of the predominant cultures of India. It had a steady growth from its inception in the 6th Century BCE to its endorsement as the state religion of the Maurya Empire under Ashoka in the 3rd century BCE. Since the later years of Gupta Empire, Buddhism had a steady decline through the gradual Muslim conquest in the Indian subcontinent and the Monks had to flee towards the higher altitudes of the country.
A revival of Buddhism began in India in 1891, when the Sri Lankan Buddhist leader Anagarika Dharmapala founded the Maha Bodhi Society. In 1892, Kripasaran Mahasthavir founded the Bengal Buddhist Association (Bauddha Dharmankur Sabha) in Kolkata which still is functional with a proper library, meditation hall and a medical centre. Devotees around the world who plan to visit Bodh Gaya rest here before departing for the pilgrimage. 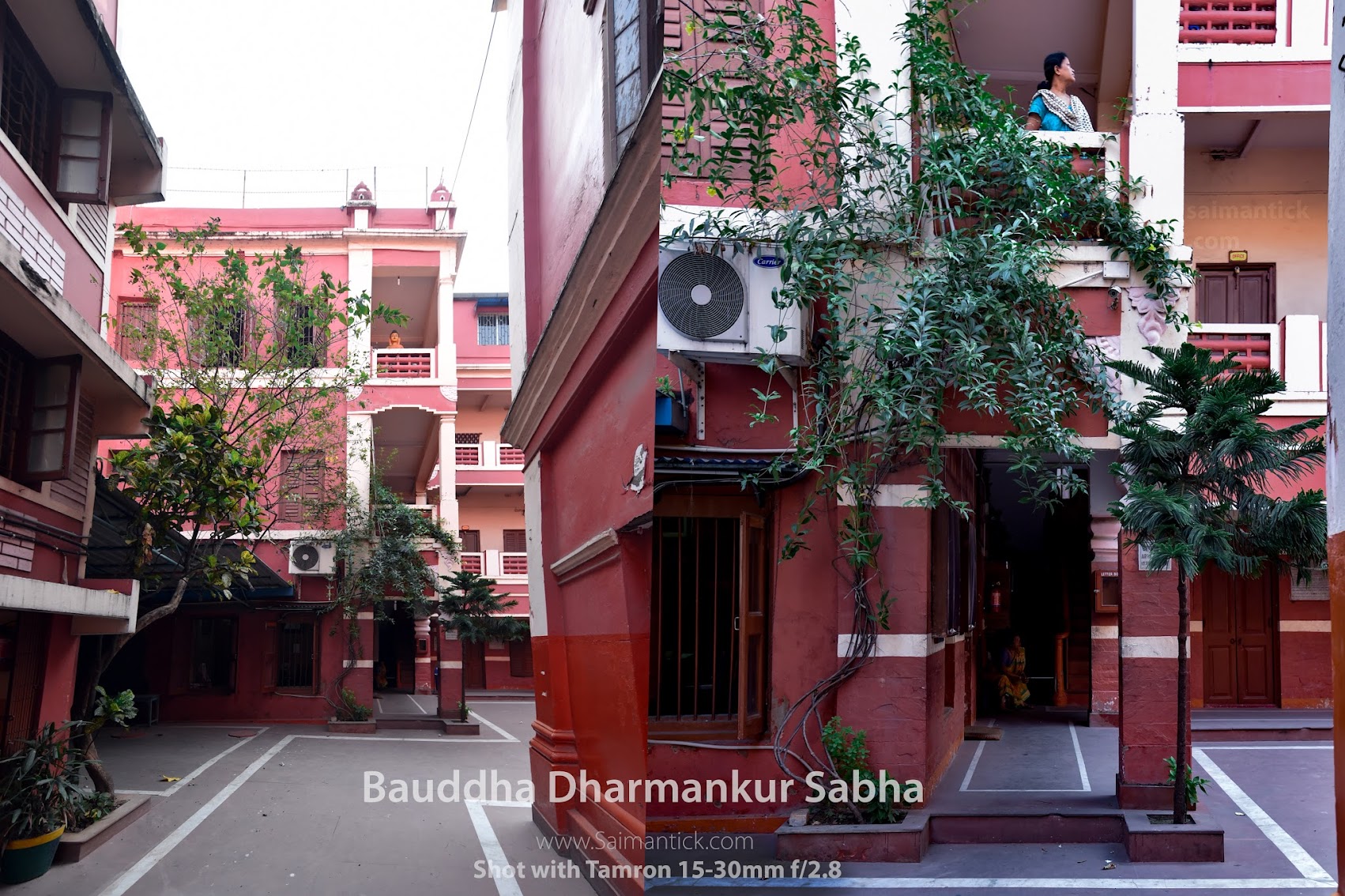 The formation of Anglo-Indians is not an accident but a planned execution of an ideology.
The British wanted to take up the native citizens and provide them shelter and education of the West. They built up colonies in Kolkata for their armies but when they had to leave India they gave those built condos to the Anglo-Indians. This was the city that took British and Western culture in a manner that the other metros of the country never did. Thus, Bow Barracks is home for 132 families of them, 80 percent of the residents are Anglo-Indians. It has acquired a reputation of sorts for its Christmas celebrations.

Chinese immigrants started seeking refuge centuries ago and became more prominent in the late 18th century.The community numbers about 4,000 with around 2,000 living in Kolkata where there are Chinatowns. Hakka Chinese of Kolkata tend to be endogamous but at the same time have integrated into Kolkata society by learning the Bengali language. The confluence of the two cultures, Chinese and Bengali was such that many words in Bengali can be attributed to Chinese influences. For example, chini(this is true, I am not racist), the Bengali word for “sugar” comes from the word for China, and words like Chinamati for porcelain china hint at Chinese influences.

Metcalfe Street was a typical North Kolkatan narrow lane which has the oldest Chinese fast food centre and beside that was the building with Chinese letters inscribed around the wall. That very lane can be termed as the centre of convergence since the it leads to a proper Bengali bazar on one side, with Muslim restaurants on the other and the Parsi fire temple at the end of the lane.

The Islamic conquest of Greater Persia forced the Zoroastrianism to vacate Persia and move to Khorasan before they had any knowledge about India.

“They were headed by a Priest, who reached the shores of Gujarat with around 500 Parsi families and to seek refuge in King Jadav Rana’s kingdom. The King, as witty as he was, showed him a bowl of milk filled to the brim to show that his country was full and could not accommodate more. The Dastur (Priest) put a pinch of sugar into the milk, which immediately dissolved without overflowing the bowl of milk. By this action, he symbolised that accepting the Zoroastrians would mean they mingle with his people and add sweetness to their lives and country without upsetting the population.” narrated by Anirban Saha.

The King was impressed and he allowed them to settle in Sanjan under four conditions.

1. They should lay their arms.
2. Their women should adopt to the Indian way of clothing.
3. They should learn the local language.
4. They should not convert any locals to their religion.

Zoroastrian iconography with Chinese carving on the door. (Though the temple were built by the Zoroastrians, the workers present at that time were all Chinese hence such were the carvings.)

The immigration of Zoroastrians to India continued, and by 1477 they had lost all contact with Persia. The first Parsi Fire temple was built in 1839 by R. C. Banaji. It is in ruins now. The fire temple above was established in 1912, by Ervad Dhunjeebhoy Byramjee Mehta. It is a two storey building. The first floor is spacious, marble-floored and is very peaceful. Inside the inner sanctum, a circular altar is located at the centre of the hall and is housed by the Holy Fire.

The holy fire is an amalgamation of fire from the goldsmith’s place, the blacksmith’s place and from a lightning. The fire is brought from Iran by foot to Gujarat and then to the respective Fire Temples.

The Carey Baptist Church was an interesting place to visit because of its history. William Carey was a British missionary, a Particular Baptist minister and the person who translated the Bible into Bengali, Oriya, Assamese, Arabic, Hindi and Sanskrit.

His contribution in the field of education is huge, he also founded the first University in Srerampore.

The Jewish community of Kolkata is mostly Baghdadi Jews. In the heyday of the Jewish settlement in Kolkata the community was 6,000 strong. The community declined in numbers after the formation of the Jewish state of Israel. At present, there are fewer than 20 Jews in Kolkata.The first recorded Jewish immigrant to Kolkata was Shalon Cohen in 1798 from Aleppo in present day Syria. The first generation of Jewish settlers in Kolkata spoke Judeo-Arabic at home and adhered to their Arabic style of costumes. The next generation of Jews adopted European dress and lifestyle and English as their language of communication.

In 1825, Ezekiel Judah Jacob built the Neveh Shalom Synagogue on Canning Street. It was rebuilt in 1911.

A moment where Iftekhar Ahsan, popularly Ifte (Calcutta Walks) shares the story of Anglo-Indians.
(Shot by Aikantik Bag)This post would not have been possible without Anirban da’s help, Iftekhar da’s amazing knowledge of the city and Tamron‘s help for lending the 15-30mm f/2.8 VC lens. The images were sharp all throughout the frame even on 2.8 f-stop, vignetting and distortion was minimal, lens flare was not an issue at all. I loved every shot I fired with this lens.

Do share it if you like it and do take part in the initiative “The Future of the Past“, you are expected.

The Tolerant Kolkata was last modified: February 28th, 2017 by Saimantick

5 Reasons To Absolutely Go To The Edutainment Show

The Sound of Music

What is it to be a Photojournalist...

Wallpaper Of The Week 1

How Did I Begin

What is 3D Printing? Everything You Need...